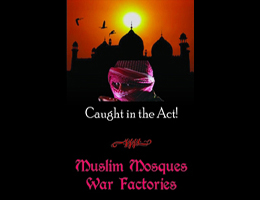 This shocking DVD of hidden video footage taken inside Muslim Mosques on American soil, proves that these Mosques are actually war factories for Muslims in their war against America!

American Muslims are caught in the act of treason, raising funds for Muslim terrorists at home and abroad, training Muslims to “Eliminate America,” and exposes our own United States Government ordering Bibles burned while issuing military orders to “handle the Koran as a delicate piece of art.” This DVD is a must-see to believe.

Join the fight and help as the American Constitution Center actively demands our State and Federal Governments to shut down our enemies who war against us!