Please enjoy this video message from Louie E. Johnston Jr., Founder of Christian Patriots.US, American Constitution Center, and Co-Founder of Patriot Pastors. (To turn off the walk on screen videos, click the X at the lower right side of the speaker.)

Watch Franklin Graham agree with Louie E. Johnston Jr. about Muslims, then watch below Louie’s “America’s War with Muslims” (below) televised broadcast that PROVES ALL MUSLIMS are at war with “The Church” and America, Jews, Catholics, Protestants… Christians of all types.

1,500 murdered by Muslims sworn to kill every Christian and destroy the Cross

ISIS just released a video showing what they claim are Iraq’s Army POWs captured by ISIS, driven away in truck loads and then shot them all dead. The video caption stated that there were 1,500 individuals. The video shows their end being shot at point blank in several horrific mass slaughters reminiscent to what we see during Nazi Germany. The young teens begged for their lives as they were made to curse Al-Maliki but to no avail while they were forced to chant “long live the Muslim nation”.

The voice speaks how they captured soldiers covering their uniforms with civilian cloths. Then they show soldiers pleading cursing Maliki while other chant “long live Islamic Nation”. The last man they slapped as they went down to the river had part of his back showing as his shirt was short and they blurred his skin lest it was sexually arousing. Then they are seen shooting the captives in the head and tossing them in the river under a pool of blood as the narrator from the ISIS stated victoriously:

After the men were executed and tossed in the river the voice goes to say “Here was the spark ignited in Iraq. It will arise Allah willing until they burn the armies of the cross in Dabiq“.

According to Islam, Dabiq  is a prophetic battle which speaks of the Last Hour (Day of Judgment) would not come until the Christian masses would land at Dabiq (in Syria) and they will be defeated and then the cross is finally destroyed and all Christian survivors that are left will convert to Islam.

The reason for throwing victims in the river stems from Khalid bin Walid. When the Christians and Persians from Ullays turned down a peace offer by Khalid bin Al-Walid, the most respected Muslim general in Muslim history.

The story goes that when Khalid made a vow to Allah during the battle that if he defeated these resistors, he would make the canal that surrounded their village literally run with their blood. When the outcome was in Khalid’s favor, it actually took a day and a half to behead all of the captives. The obstacle for Khalid was that the ravine of blood coagulated and Khalid’s troops were forced to eventually release water into the canal in order that it would run red with the blood of the slain lest Khalid’s vow be left unfulfilled.

Muslim Imam in mosque calling for killing all Jews

Tennessee Imam preaching theft, rape and murder of Christians and Jews in the US 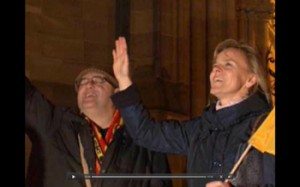 Listen to CBN report that “Muslims have conquered Europe”

Sheikh Omar Bakri explains Muslim mentality: ‘If (the West) accepts Allah they may do so. If they don’t, we will fight against them.’

This two hour debate has been edited down to seven minutes.

This clip comes from a 2-hour debate between ex-Muslim Dr. Wafa Sultan, and Sheikh Omar Bakri Muhammad, the former leader of Islamic terrorist groups Hizb ut-Tahrir and al-Muhajiroun. In this clip, the two discuss the issue of human rights under Islam. Sheikh Bakri affirms here that Muslims and non-Muslims are not equal, due to the dictates of Allah, and if non-Muslims don’t accept Islam, Muslims must fight against them. He also explains that the blood and property of non-Muslims are permissible for Muslims, unless the non-Muslims enter into a peace treaty or a dhimmi pact [i.e. pact of protection offered to Christians and Jews].

Subtitled video is above, transcript is below (see the full original video without subtitles here):

Host: Sheikh Omar, what are human rights under the shari’a? Can you explain this for us?

Omar Bakri: The shari’a has defined human rights for Muslims and for non-Muslims. The non-Muslim has chosen to not accept the judgments of Allah. Therefore, yes, his rights differ from those of a Muslim. I say that they are not equal. The other party might disagree with me, that’s fine. That’s her opinion. But Islam gave rights to man, in order to satisfy his needs and take care of his affairs. Muslims and non-Muslims who have previously made a peace treaty or a dhimmi pact, are equal when it comes to citizenship. In other words, they are the same. The Islamic state and the Islamic shari’a, when governed thereby, guarantee their political needs, such as shelter, food, clothing, security, education, and health care, for they are under the care of the Islamic state. However, this equality does not mean that you are exactly like us. Yes, a non-Muslim under the Islamic shari’a cannot have any rights except those which Allah has legislated for him. Allah has legislated that he may have his belief, religion, clothes, and everything which is needed by all citizens, Muslim or non-Muslim. Now the Muslim has greater rights and respect because he is Muslim, for Islam is above others, and never below, so the Muslim is above others, and never below. […]

Omar Bakri: I don’t believe in the equality of man, because men are not equal in the view of Allah. He commanded us to not make them equal. For example, I have the right to marry a Christian or Jewish girl, but it is not permissible for a Jewish man to marry a Muslim girl. This is correct. I am not calling for equality. When I go to Britain or Europe, I have the same right–my blood and property are inviolable. In exchange, their blood and property are also inviolable through this peace treaty. Their blood and property have no protection except through a peace treaty or a dhimmi pact. Thus Allah has commanded–you can either accept it or reject it.

Wafa Sultan: So when you travel to a Western land you consider it the land of Allah, and you want your beliefs to apply there?

Wafa Sultan: You want to dictate to the native inhabitants of the country what they can do?

Omar Bakri: I invite them, and if they accept the command of Allah, then they may do so. If they don’t accept, and kick me out of the country, then we will fight against them. The relationship between us is either a pact of belief in Allah, or a peace treaty, or war. The general rule is that the blood and property of non-Muslims are permissible for us. Their blood and property are not inviolable. It is in their interest to have a peace treaty or dhimmi pact with me. It is in your interest, you who say that you do not believe in Islam, to accept that there be a peace treaty or dhimmi pact between us. The dhimmi pact falls under the Islamic shari’a, but the peace treaty does not subject you to the shari’a. That’s the way it is. Either you accept it, or we live in a state of war. The general rule is that the blood and property of infidels are permissible for Muslims. The Prophet Muhammad even said, “I was sent to fight against the people until they testify that there is no god but Allah, and I am the apostle of Allah.” Therefore if he said, “Their blood and property are inviolable from me,” then their blood and property would be inviolable if they believed in Islam or accepted a peace treaty. It is either through faith or a peace treaty that man lives with his neighbor. But a Muslim coexists with an infidel either through a peace treaty, a dhimmi pact, or a state of war. This is the basic relationship between a Muslim and an infidel.

Host: Thank you, Sheikh Omar. You went over your time, but it helped us gain a complete understanding of the topic. Dr. Wafa, what do you think about what Sheikh Omar Bakri said?

Wafa Sultan: I think that Sheikh Omar Bakri’s response should be recorded here. He was clear and frank, and explained the doctrine of Islam to the point that there is nothing left for me to reveal of that repulsive truth. Muslims here in America boast that the human rights recognized worldwide are the same as the rights under Islam. They boast that men’s rights are the same as women’s rights. They boast that Muslims’ rights are the same as non-Muslims’ rights. They boast that the shari’a can coexist with the American constitution. Therefore we should record Sheikh Omar Bakri’s response, for he did not dissemble, but instead manifested the truth of his religion in all its ugliness and hideousness. Under the shari’a he is required to fight against others until they believe what he believes. Is there anything uglier than this shari’a on the face of the earth? Is there anything uglier than that this should be imposed upon me by force, by arms? When we tell Americans here that Islam was spread by the sword, Muslims scream that this is not true, that it was spread by tolerance and the free word. But I want to stress what Sheikh Omar Bakri said, for he is a true Muslim, and has revealed to us the truth of Islam without equivocation. All the world should take note of the danger of this doctrine and fight against it will all their strength, for we cannot accept that any man on the face of the earth should force us to believe in his god.